Humans aren’t the only animals that love to surf waves.

Dolphins get a kick out of this activity as well.

In fact, these intelligent and curious creatures love nothing more than riding waves in their pods.

Dolphins are great surfers and swimmers.

They are also playful and fun-loving animals, and so they enjoy riding waves.

You can often see pods of dolphins catching surf breaks, and once they finish riding a wave, they will go back and ride another one.

You will even see them jumping out of the water, showing you just how excitable they are and how much fun they are having.

Sometimes, animals do things because they enjoy them, just like humans.

However, there is also a theory that suggests dolphins surf to dislodge parasites or to communicate and bond.

Is it Dangerous to Surf with Dolphins?

All animals can be dangerous if they are provoked or aroused, and there’s no way of knowing how a dolphin will react to your presence.

Seeing dolphins swim up close is an amazing and unforgettable experience, but it’s not something you should seek out as there are risks.

After all, we’re talking about an animal that weighs several hundred pounds and can swim at over 20 miles per hour.

If one of those things hits you, it’s not just a broken surfboard that you have to worry about.

Admire them from a distance and don’t get too close.

Dolphins are not as dangerous as sharks and you don’t need to flee as soon as you see one nearby.

But caution is still advised as things can get very ugly very quickly if they are annoyed.

Do Sharks Swim Near Dolphins?

Traditionally, dolphins are a good omen for surfers.

The old adage says that if there is a pod of dolphins swimming nearby, there won’t be any sharks in close proximity.

Legend has it that the ferocious fish are scared of the playful mammals, but while dolphins can fight off shark attacks, sharks aren’t really deterred by them.

Don’t assume that there are no sharks nearby just because you can see a pod of dolphins.

Why Do Dolphins Like to Swim in Front of Boats?

Humans have been fascinated with dolphins for thousands of years.

The ancient Greeks documented their exploits in murals and texts, showing them swimming, surfing, and jumping out of the water while also describing their fascination with sailors.

We don’t know for sure why dolphins follow boats (we can’t exactly ask them ) but there are a couple of potential reasons.

The first is that they’re curious.

They’re animals, after all.

If you place a new piece of furniture in your home, your cat or dog will probably go over there and check it out.

It’s in their territory, and they’re intrigued.

The same is true for dolphins, only their territory is the sea and their “furniture” is a fast-moving boat filled with interesting bipeds.

Dolphins may also follow boats so they can play in the wake.

In that sense, they don’t just have something in common with surfers, they’re also wakeboarders! 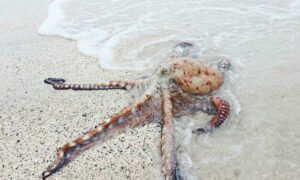