The spectacular Peek-A-Boo trail, situated in the heart of the majestic Bryce Canyon National Park in Utah, is infamous for its spectacular hoodoos, multicolored geological formations, and breathtaking panoramic views.

The Peek-A-Boo trail in Bryce Canyon is a 3-mile loop trail that takes 3-4 hours to complete. It is considered a moderate trail with several challenging ascents and descents. The three Peak-A-Boo trailheads are situated on the Bryce Point, Sunset Point, and the Queen’s Garden trails.

The Peek-A-Boo Trail: A Brief Overview

The Peek-A-Boo trail offers hikers the opportunity to enjoy the most breathtaking views of the Bryce Canyon National Park’s majestic hoodoos and serene woodlands during the Sunrise Point to Bryce Point section, situated on the elevated Bryce Creek drainage basin.

The Peek-A-Boo trail is far from most of the park’s other trailheads; it is a peaceful route to enjoy a little solitude, except for a few horseback riders. So, it would be prudent to navigate the loop trail in a counterclockwise direction so that you can spot horseback riders well in advance.

The trail path is well maintained, mostly level, and wide enough, although dusty. Therefore, wear sturdy hiking boots to give you adequate traction to transfer the occasional strenuous climbs or descents.

Other essentials include a topographical map including lots of water as it can be a long and arduous journey, so you will have to stay well hydrated.

When you arrive at the Bryce Canyon National Park, you can use their free shuttles that leave every 15 minutes from the parking lot and purchase a backcountry camping permit if you would like to extend your stay.

Then keep a lookout for the trail’s spectacular views of the Bryce Temple, Fairy Castle, Cathedral, and Three Wise Men, including the majestic Wall of Windows spires.

The Best Time To Hike The Peek-A-Boo Trail

The ideal time to hike in this region is when the snow has melted; normally in the middle of April; however, you will have to contend with mules on the trail.

While it is difficult to access the park during the wintertime, and you might get snowed in at times, it’s far less crowded, and seeing the transformed hoodoo colors with scatterings of snow is magical!

Other wintertime perks include ranger-guided snowshoe hikes and booking sleigh rides in the surrounding lodges.

There are three main Peek-A-Boo trailheads on the plateau rim, of which the shortest route is via Bryce Point Trail, which descends 600 feet for roughly a mile towards a junction towards the southern edge of the loop intersects with the Hat Shop Trail.

If the Bryce Point Park is closed in spring due to post-winter repairs, use the second trailhead at Sunset Point, which is also used to access the infamous Navajo Trail.

The Sunset Point trail meanders along for roughly 0.6 miles towards a four-way intersection with a trail that connects with the northern endpoint of the Peek-A-Boo Trail.

The third trailhead is via the popular Queens Garden Trail that starts at Sunrise Point and descends steeply by roughly 320 feet to the breathtaking garden, which is a covered basin under an arched row of peaks, and winds around a level hillside towards the cross-path at the end of the Navajo Trail.

The Start Of The Peak-A-Boo Loop Trail

Commencing at the demarcated intersection towards the end of the Navajo Loop Trail, which intersects with the Queens Garden Trail, an additional trail meanders southwards and interlinks with the upper section of Bryce Creek.

Bryce creek is normally a small yet rapidly flowing creek in spring or at the beginning of summer, but it dries out towards the end of the season.

The creek is at its most beautiful when the snow starts to melt and creates rainbow-colored tributaries which emanate from the multi-hued rocks it was colored by.

The trail then meanders downstream through the valley and passes another intersection with a Queen’s Garden horseback riding trail.

However, the eastern trail’s scenery is more diverse, with magnificent hoodoos and forested gorges. The western section of the trail provides more breathtaking views of the highland rim.

The previously mentioned western section of the Peek-A-Boo trail rises steadily upwards to the southern part of the scenic Bryce Creek valley on a straight path at first.

The trail then follows a zig-zag route upwards to the bare ridge, which provides a 360-degree panoramic view of the rock formations on the plateau’s rim under Inspiration Point.

From there, the trail winds past numerous gigantic hoodoos and around the spectacular named The Cathedral, then it ascends and meanders through a little ravine, and tunnel, sheltered ravine, and then it descends steeply with switchbacks.

Then it ascends to the Wall of Windows lookout point, which consists of a spectacular light-colored ridge adorned with elegant peaks and graceful arches.

The approaching cliffs appear to look whiter towards Bryce Point and pass along to restrooms, including a horse tethering location from where there is a brief ascent to the halfway intersection, which is restricted with a 1-mile Bryce Point sign.

The Western Sections Of The Peak-A-Boo Loop Trail

Once you reach Bryce Point, the loop trail meanders in a northerly direction and alongside the picturesque eastern part of the vast wooded gorge with a few hoodoos dotted along the way.

Then its transverses towards the left and meanders around a hillside to a shaded drainage area with stately pine trees and orange-colored rock formations.

The trail ascends back towards the main path that heads towards a picturesque, diverse scenic landscape with elegant, white-tipped peaks, orange-tinted sandstone hoodoos, including a rainbow-colored, towering Fairy Castle.

The majestic Peek-A-Boo Trail concludes with an extended descent, including numerous switchbacks in the direction of the Bryce Creek junction. However, should you want to know more about this once-in-a-lifetime hiking trail, look at the park’s informative website.

The 3-mile Peek-A-Boo trail offers avid hikers a rare opportunity to encounter one of nature’s most extraordinary creations, the spectacular Hoodoos, including serene woodlands where you can fully appreciate the magnificent splendor of nature in blissful solitude. 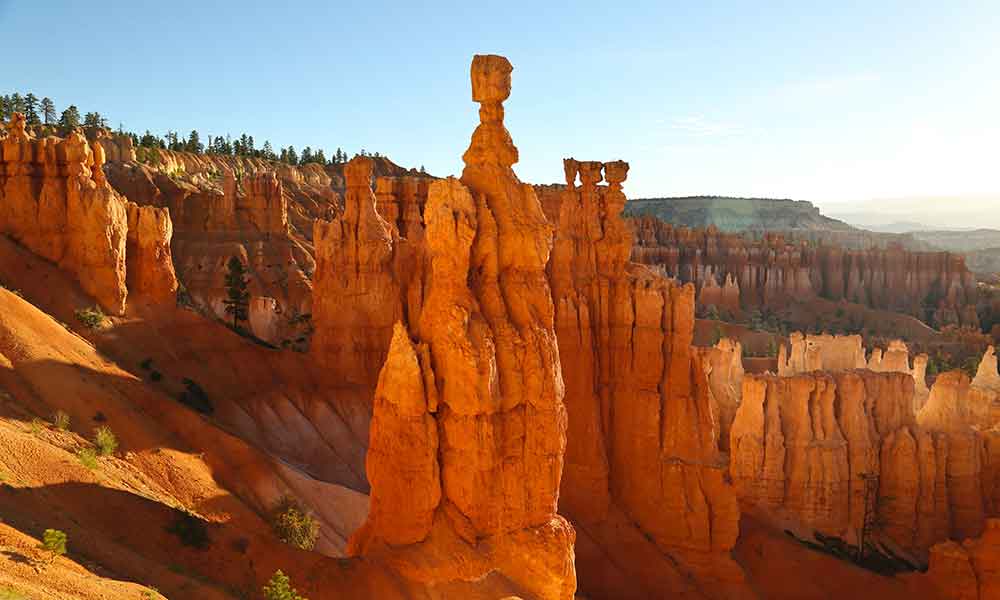 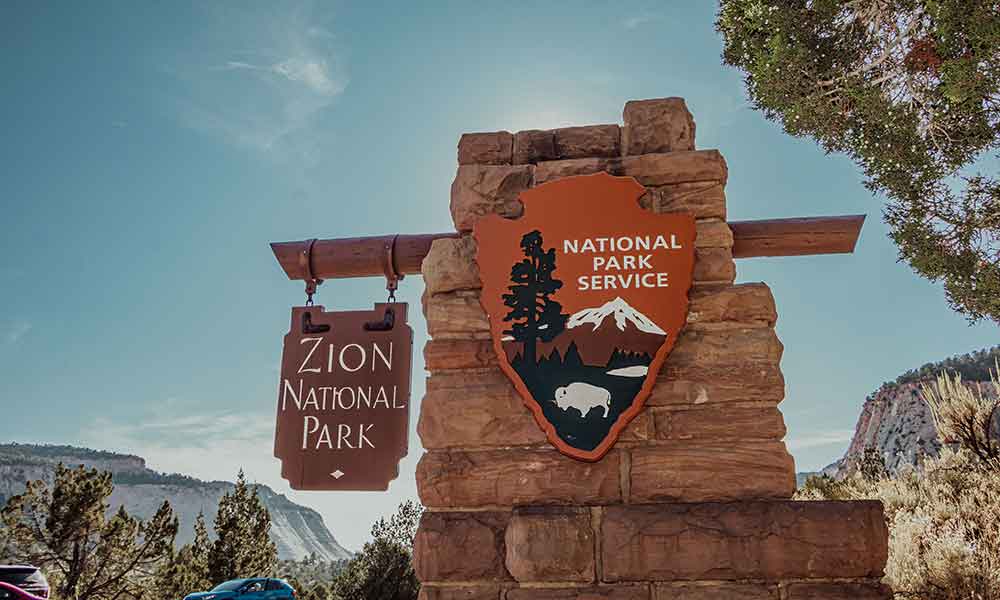 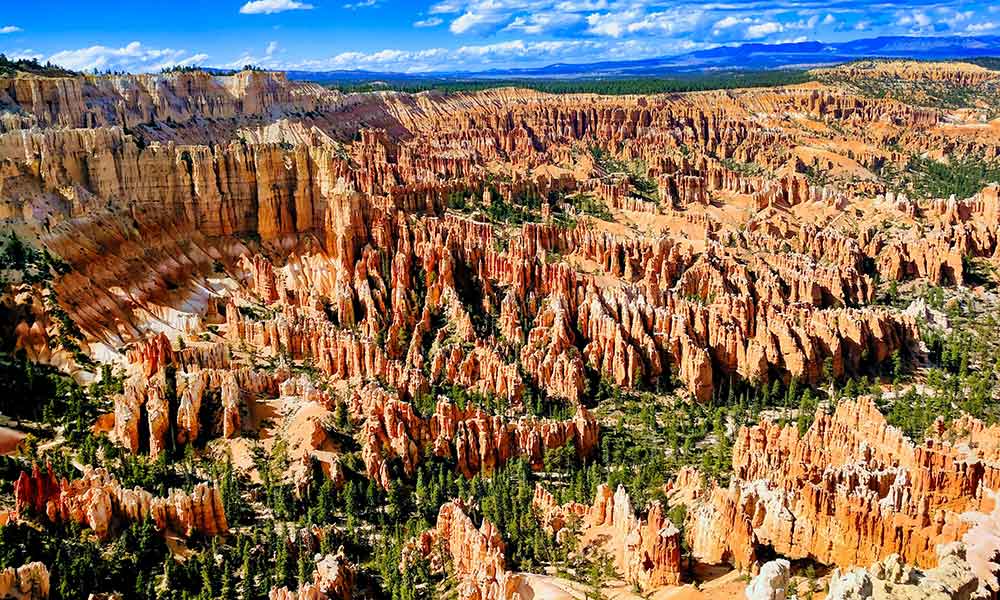 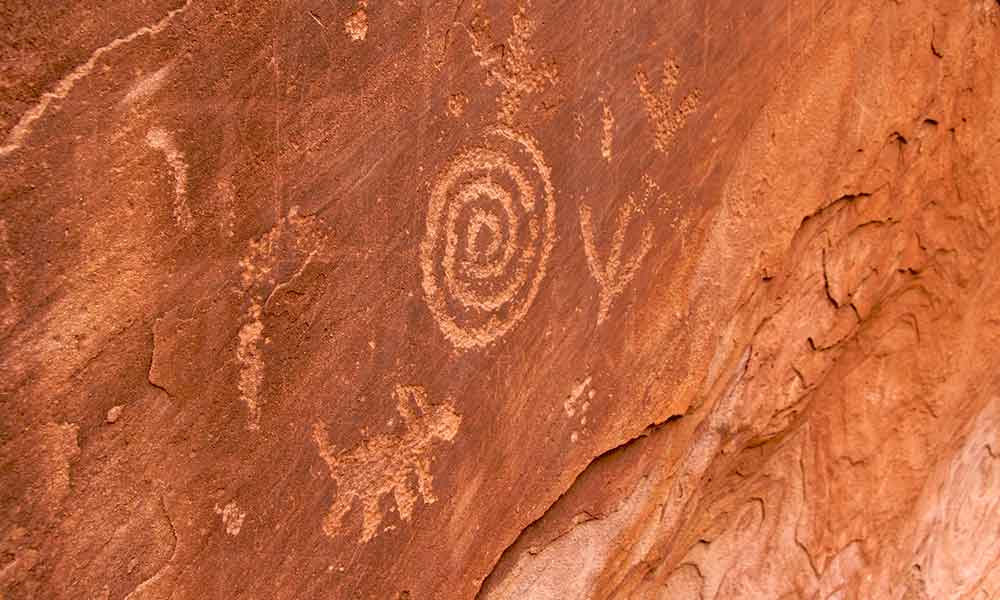 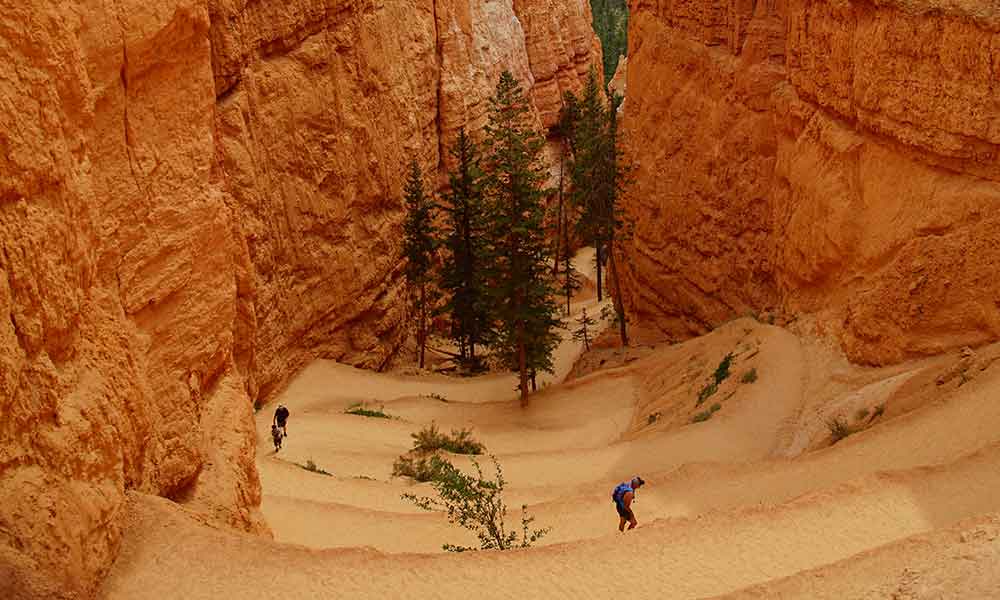 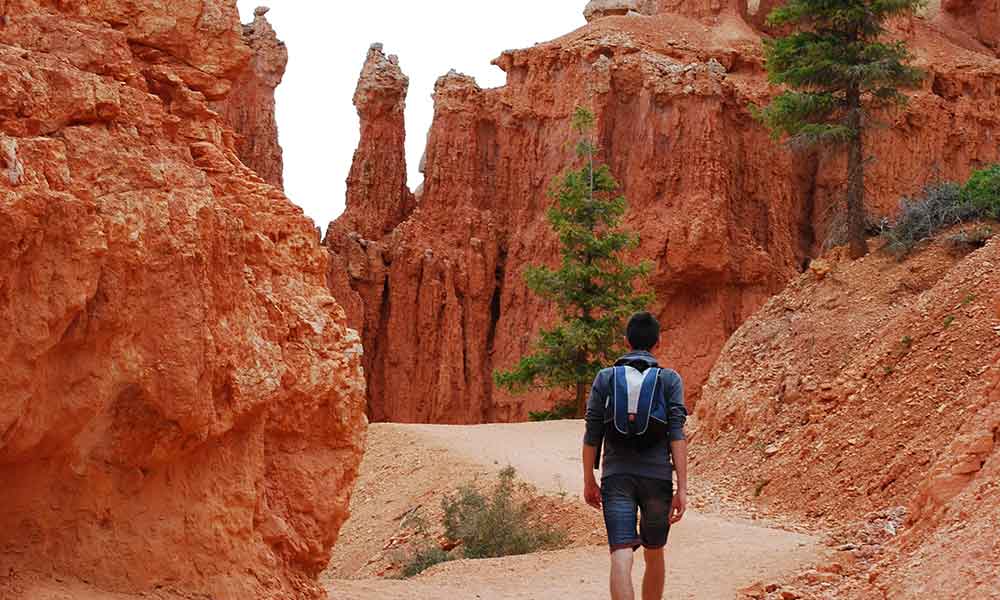