The outdoor lifestyle that camping represents has gripped the heart of Americans, with almost 48 million people formally camping in 2020. Almost everyone one of these travelers went to formal RV camping sites and enjoyed the facilities these offer. What about those who want to stay under the radar?

Stealth camping involves parking your RV, generally in metropolitan areas, in places where you won’t be noticed. It could be a hotel parking lot or similar sites where you could be charged with trespassing or breaking city ordinances by sleeping in a vehicle within the urban boundaries.

There are numerous reasons to camp stealthily. For some, it’s the adventure of doing something risky; for others, it is to save costs on formal camping sites, whereas for others, it may be near an event or attraction. Whatever the reason, we are here to offer advice, not judgment.

Traveling with your home attached to your vehicle is becoming a more and more acceptable way of living. Many YouTube channels are dedicated to following people’s lifestyles who live this nomadic existence.

While enjoying the lifestyle stealth camping offers, being essentially homeless seems to be growing in popularity. The American census bureau reports that the number of vans and boats used as full-time accommodation increased from  102,000 in 2016 to 140,000 in 2019.

With the advent of COVID-19, the total has significantly increased, with more and more Americans choosing the freedom which stealth camping offers compared to the restrictions of a small apartment.

You must understand that not all stealth camping is legal, and many “sites” involve trespassing on government, municipal, or privately owned land. Many cities’ ordinances make it illegal to park a car along city streets between 8:00 PM to 5:00 AM and forbid anyone to sleep in a parked vehicle.

Unless the vehicle is parked in an authorized location or on private property, the owner confirmed the activity; using it for stealth camping is illegal.

Despite this, many people do stealth camping and take it to an art form in the way they remain incognito.

Although we don’t endorse contravening regulations, if you find yourself in this position, you can take some basic measures to enhance the experience.

Where Can You Stealth Camp?

To camp stealthily, you basically can stop anywhere where it is not generally permitted and set up camp.

The spots typically chosen by stealth campers are.

It may be legal to park a car or van in a legal parking spot; however, most towns and cities have ordinances that forbid sleeping in a vehicle during the day or parking and sleeping between certain hours overnight.

Sometimes, a parking fee is charged between the morning and the evening. Outside of these hours is when the game starts. As long as you arrive at the time when no fee is charged and leave before the start of the charging period, you should be good to go.

Of course, there is always the chance that an overzealous official may try to ruin your plans, but that is the fun of stealth camping.

The camping, hunting, and outdoor chain have rolled out the welcoming mat for RVs and vans to stealth camp in their parking lots.

Although this is not an official company policy, they allow it on their 169 retail locations around America.

Even though there is a dedicated parking area for stealth campers at some stores, it is good etiquette to introduce yourself to the store manager and check it is for you to spend the night.

Some stores are even equipped with plugs enabling access to electricity, water, and black water disposal facilities.

The arrangement is only for a single overnight stay, and because they are so generous, you mustn’t abuse this privilege.

They do not offer any amenities but recognize the value of supporting the stealth camping community. However, permission will only be granted if there is sufficient space available in the parking lot.

They are not designed exclusively for stealth campers but have been established as a place where truckers can rest overnight.

They often have access to amenities, including a diner, making the overnight stay more comfortable.

It is suggested that you park as far away as possible from the truckers as some are a little parochial over who uses the facility. It is a small percentage, and generally, truckers are very kind and accommodating.

The nature of breweries’ products can make it illegal for people to drive away from their premises. So generally, they are amenable to stealth campers overnighting on their property.

It is only polite that you sample and purchase some of their beverages to take advantage of this.

Remember, these are people’s homes, and you need to respect this fact.

Before parking in a residential area, it may be worthwhile to ask if this presents a problem. The more active and militant the homeowner’s association is, the less chance you will have of being allowed to park.

If you still must stealth camp in the neighborhood, you can give it a go, but you will have to be stealthy!

Don’t park in front of someone’s house. Not only is this possibly alarming for the residents, but if they are awake, you will be spotted and sent on your way.

Look for apartment complexes. No one cares about extra cars parked near them.

Many other places are suitable for stealth camping, including hotel parking lots, strip mall parking lots, 24-hours businesses, and even some gas stations.

How Do You Camp Stealthily?

Suppose you want to spice up your RV life, then stealth camping may be for you. You can do a few things to stay under the radar.

Use A Nondescript Vehicle To Stealth Camp

Instead of buying a flashy RV or camper which boldly advertises its purpose, consider buying something a little blander. The best options are white cargo and minivans, which you can convert to an RV.

Panel vans are also a good option, as the lack of windows reduces how conspicuous they are.

Even better are construction vehicles and box trucks, as these seem to go almost unnoticed when parked in city or industrial areas.

Keep The Vehicle In Good Order To Camp Stealthily

If you don’t want to attract attention, keep the vehicle clean and look presentable.

If it is a rusted hulk with cracked windows and broken mirrors, you can expect a knock on the door from a traffic or city official wanting it moved.

Change Your Routine If You Want To Stealth Camp

If you are going to stealth camp for a period, try to adjust your routine, so you never camp in any place on the same day every week.

It makes it harder for observers to predict your movements and judge what you are doing.

Stealth Campers Must Manage Their Security

Check the type of neighborhood you want to park in. Is there a lot of graffiti on the walls, gang members roaming about, or a lot of people seemingly loitering? If you do not feel safe, trust your instincts and move on.

There is nothing worse than facing the consequences of an action and wishing you hadn’t taken it when your instinct was telling you not to.

Always Park in a spot with an obvious exit and sufficient room in front and behind the van to make a quick getaway possible.

Lock your doors and install an area protection warning system that activates if someone moves around the outside of the vehicle.

Whether legitimate or not, anyone confronts you, don’t stand your ground or engage them. Take the keys and move off.

Keep a bottle of pepper spray handy to disable anyone who has ulterior motives.

Make sure you have a way of blocking the view through the windscreen to the living area of the van.

Whether you are looking for a holiday out in the country at sites that may not legally permit RVs to stop overnight, you enjoy living on the edge, or because circumstances have dictated, stealth camping is a feasible, if not always convenient, way to live.

Take the necessary precautions and look after your security needs, and you will be able to safely camp in a stealthy way. Camping for free with no site rental is a challenge, and we sigh you the best of luck! 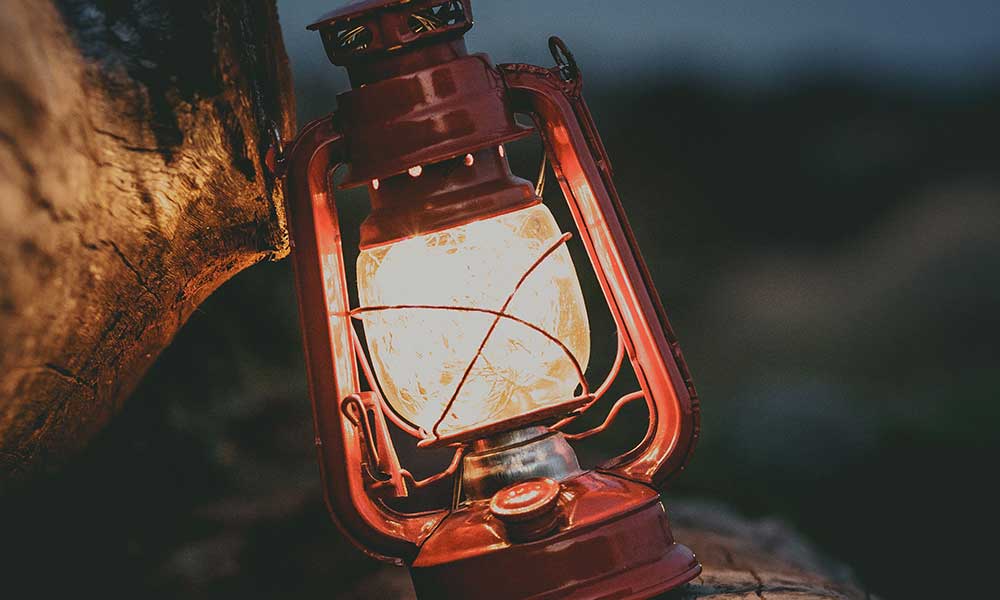 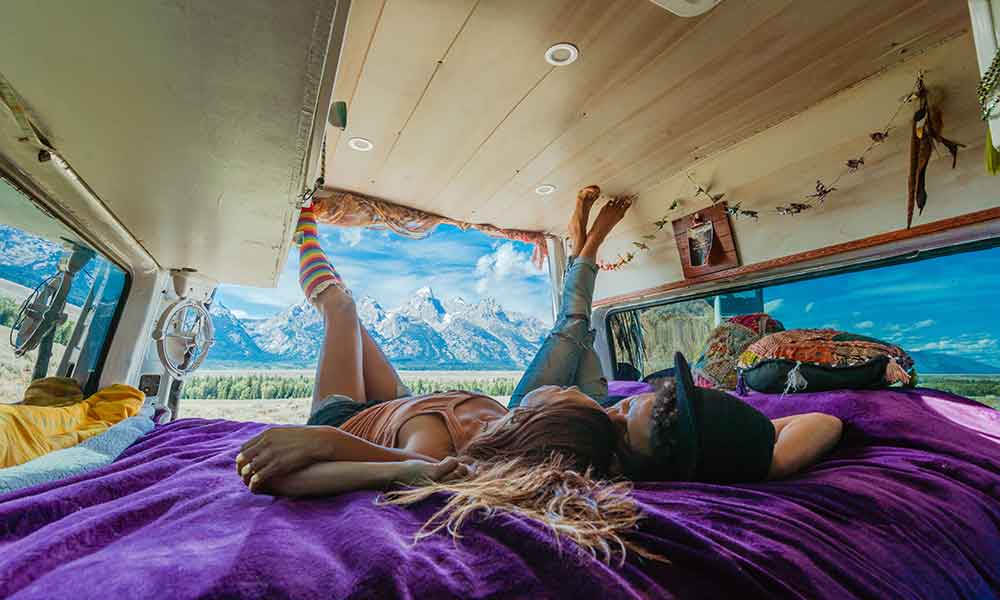